Nottingham based multi-media artist Andrew Stewart presents a new range of vibrant and thrillingly modern new paintings and limited editions, which draw on Andrew’s obsession with traditional themes and update them with a vital contemporary sci-fi infused twist.

Andrew has enjoyed a splendidly varied career in visual arts, taking in a spell at Disney where he worked as an animation designer, and a period as a commercial graphic designer, creating among other things book cover commissions for the likes of Cambridge University Press, Stephen Hawkins and the astronomer Carl Sagen, whose work Andrew cites as a major influence.

These works draw on all of Andrew’s thirty-year experience as an artist and designer, gracefully blending themes taken from traditional portraiture and spinning them out with a range of modern techniques. He typically paints with acrylics and inks but for much of these works Andrew uses a 1970’s AB turbo airbrush, a tool originally used for planet mapping by NASA. This unique item of equipment enables Andrew to paint with both near-pointillistic detail, and to also achieve the rich ‘burst’ effect so prevalent in these works, and which lights up each model with real sense of luminescence. We’re sure you’ll agree that they’re out of this world!

Andrew says of his artwork; “I am always interested in new ideas, to experiment with and to go anywhere in the mind’s eye, opening new doors to the visual imagination. Art is an expression of ourselves and the beauty of a piece of art is in the eyes of the spectator”. 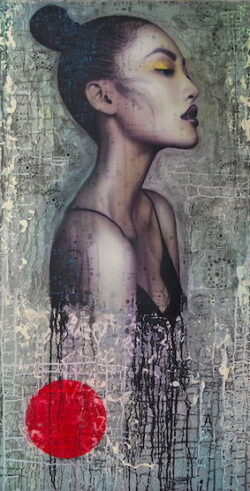 Welcome to The Teahouse, Canvas on Board Giclée Limited Edition

Geisha Made in Japan, Canvas on Board Giclée Limited Edition