Born in 1968 in Canterbury, Hamish Blakely completed his Foundation course at Wimbledon school of Art after which he graduated from Kingston University in 1990. These studies informed, what remains, a fascination with the human figure. This all began early in his childhood when, like many his age, the publications of Marvel and DC comics proved an abundant source of inspiration. This appetite for painting was further amplified when he attended the ‘Desiring Renoir’ Exhibition at the Hayward Gallery in London, 1985. He recalls “I was approximately seventeen and seeing the paintings up close, noticing the luxuriant, sometimes messy concoction of paint, the washes, the texture and nuance, spoke to me in a way that I found sacred and spellbinding. I just wanted to use paint and see where it would take me.”

After completing his studies, Blakely joined the world’s most successful Illustration agency, Folio during which time his clients included The Body Shop and British Telecom. He was also chosen to paint two front covers for the world-renowned author of Schindler’s List, Thomas Keneally.

This creative propensity can be better understood when noted that he grew up in an artistic family. With two actors as parents, his father being the great Northern Irish actor, Colin Blakely and his mother, Maggie Blakely, he seemed set to solidify his youthful passion for painting. Indeed, this was the case and Blakely now enjoys international recognition as a highly collectable and accomplished, realist painter. How he has grown as an artist is something he does not take for granted just as he does not underestimate the prodigious influence his wife, Gail, has on his work, whom he met in 1991, shortly after leaving University and who remains his golden Muse. He says “I have completely changed the way I paint over decades. In fact, I am proud, not conceited, to write that I now paint in a way that I would have thought impossible twenty years ago”

With Gail as the main protagonist in so much of his output, Blakely feels it is only natural that his work celebrates the beauty of the female form. While obviously sensuous, his paintings also hint at deeper, primal forces. Using a colour palette and technique that harks back to the old masters of the Neo-Classicist and Orientalist periods, Blakely suffuses his potent heroines with a singular presence that nullifies any chance of their being relegated to pretty, wall flowers.

His Goddesses are just that, mystical beings entirely at ease in their own space. They radiate grace and an inner light that annuls any possibility of their being seen as submissive or decorative.

With his signature style of softness and strength, a remarkable balance of yin and yang, reality and the surreal, Blakely manages to synthesise Baroque elegance with a contemporary ethos. 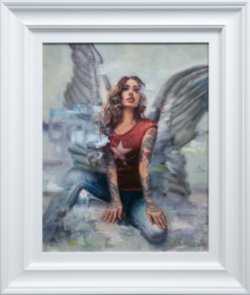 The Lookout, Giclée on Canvas 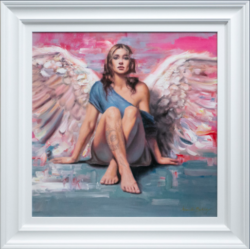 The Protector, Giclée on Canvas 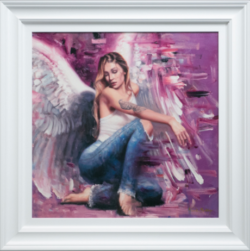 The Dreamer, Giclée on Canvas