The eldest of 5, Jacquie scribbled and strummed her way through a tomboyish and happy childhood in the north east, drawing, writing and playing guitar. She chose Graphic Design as her first route at art college in Newcastle in the mid 80s purely because it looked like the best route to being able to draw for a living. After studying illustration at Lincoln, she began working as what was known as a ‘ visualiser’ in the busy and fast paced advertising industry in London in the late 80s. Always working at the rough design stage, Jacquie found herself loving the pace of the work but quickly frustrated at never being able to produce finished pieces.

She found working as a freelance editorial illustrator for several years much more satisfying before going into teaching for 10 years in further education in Newcastle while her two boys were growing up.

In her late 30’s on a trip to London, she wandered around some funky little galleries in Notting Hill. After this she started painting, starting with pop art iconic images often using song lyrics. She found a studio in the centre of Newcastle and immediately knew she was doing the right thing.

She soon left her teaching job, once her iconic acrylic canvases began to sell and she began working in illustration again, which she’d not had time to maintain while she was teaching.

She dabbled with oils in a hugely personal set of paintings as part of her multi media solo show, ‘THE JACK THAT DIDN’T FIT IN THE BOX’, a darkly tongue in cheek look at growing up, sexual discovery and catholic guilt , all massively influenced by the music that had inspired her.

Her pop art work moved into a more teenage comic influenced style, thanks to someone commissioning Jacquie to paint Wonder Woman.

Always influenced by comic book work as a child and in her early storyboarding career her illustration work followed suit , and her trade mark became, in a nod to Lichtenstein, to take a single comic frame and sum up a story, or a feeling in one frame, usually with speech bubbles.

Now working from her garden studio in the relative peace of rural Leicestershire where she moved to in 2011, Jacquie’s original work has been exhibited countrywide. She has exhibited a lot in the North East, including The Biscuit Factory, The National Glass Centre in Sunderland, Customs House South Shields, Psyche in Middlesborough, Balman Gallery In Hexham , Jam Gallery in Whitley Bay; in Dublin, and London many times, including fashion designer Pierre Garroudi’s gallery, Arthouse Gallery, Coningsby Gallery.

Her commissioned illustration work is featured regularly in magazines as diverse as The Big Issue and Tatler, GQ, Women’s Health, Psychologies, Cosmopolitan and Wall Street Journal to name but a few.
She has worked on book jackets, cookery books, TV and web based animated advertisements and her work crops up regularly in Sunday magazines, from The Times,The Telegraph, Guardian to The Sun’s Fabulous Magazine.

Jacquie admits to still being childishly thrilled at seeing a new magazine on a shelf knowing she has an illustration in there, but nothing has been as thrilling as seeing her work used in the décor of the pop art Celebrity Big Brother house in 2017.

Jacquie is happy to work with customers with commissions for paintings, having a commercial background and constantly working to briefs with art directors through her agents in her illustration world, she is more than comfortable working with customers with their own ideas.

Where Jacquie loves to see her work in print, and onscreen, illustration work can be a very throw away business, and she says there is nothing like seeing one of her paintings at home on a customer’s wall, and knowing how much they relate to it, not just as a painting but as a statement. Jacquie loves to retain a retro comic feel to her images while taking a tongue in cheek pop at modern culture. 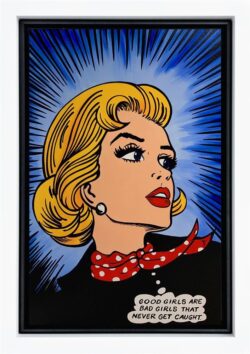 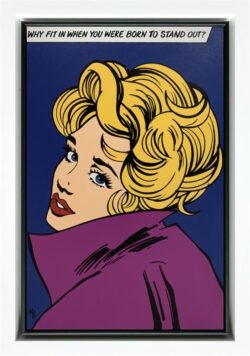 Born To Stand Out, Original Painting 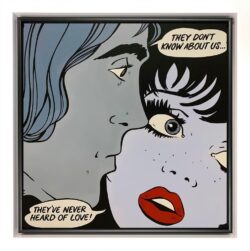 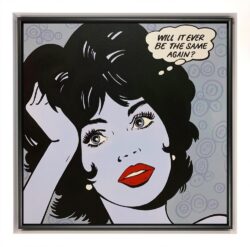 Will It Ever Be The Same, Original Painting