This piece is tapping into the plight of the Panda Bear which is shown partially disappearing into the ether, with the drips going upward hinting at the bears’ symbolic divinity, where in China it is traditionally believed to represent both the energies of Ying and Yang, as the panda is as white as he is black. This stunning animal has been depicted in hyper-real detail to show its intrinsic beauty and is also set against bright turquoise to draw attention…

Panda Pour by Louise McNaught is a limited edition print from an edition size of 25.

This piece is a giclée on Somerset Velvet 330 gsm paper. The unframed image size is 60 x 60 cm. Hand-signed and numbered by the artist.

Louise McNaught is a contemporary wildlife artist with international representation. Since completing her Fine Art Degree BSc (Hons) at the University of Greenwich in 2012, she has worked as a full-time, professional artist and published her first book in 2018. Her artwork is exhibited nationally across the UK and internationally at art fairs in Milan, Hong Kong, Singapore, Stockholm and Brussels.

In 2018, McNaught became a published author when her ‘Survival’ book was created with worldwide publishers Big Picture Press. With a focus on endangered species, the ‘Survival’ book featured 20 endangered animals painted by McNaught alongside facts about the animal’s plight and conservation efforts. The book has been sponsored by the well-known charity Tusk.org, famously championed by Prince Harry and Prince William. The foreword is written by Tusk Founder and CEO Charlie Mayhew and a percentage of the book sales goes towards Tusk.

Louise‘s creations feature nature and animals, where the animals are God-like, sublime and ethereal in their presence and depiction. McNaught’s work is motivated by emotive and spiritual experiences which has manifested in a mixed-media approach. Her soft style suggests a delicate relationship between nature and ourselves, making a clear point about man’s destruction of nature – which flutters jewel-like in the balance. When focusing on endangered species the imagery often takes on a duality of not only what is happening to the animal itself, but also reflects how we feel psychologically about the effect the human race is having on these species.

By subverting traditional representation she hints at darker consequences, yet paradoxically giving animals an elevated status. Her animals are a medium for self-expression, as lack of context and background suspends the creatures in an internal or even numinous space, where they become a metaphor for the human condition and psyche. By drawing the viewer’s attention to the animal’s presence and energy, McNaught is hoping to share with the viewer the awe that the natural world inspires within her. 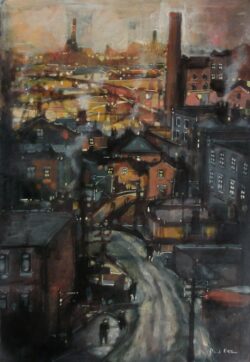 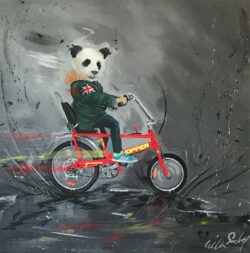 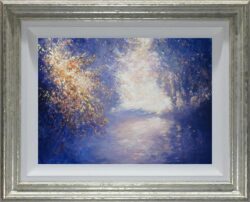