Perfect Paradise by Alfredo Navarro is a framed original painting; a beautiful Shoreline Seascape in oil.

Navarro considers his technique somewhere between Realism and Hyperrealism. His studies provided an admiration for the artists Velazquez, Picasso and Greco.

Born on the Eastern Coast of Spain in 1965, Navarro began painting professionally aged only 19. In 1986, he received first place in an art exhibition sponsored by the Government Delegate of Galicia, Spain.

Known for his breath-taking, sun-kissed shorelines and seascapes, a painting by Alfredo Navarro provides a serene sense of escapism.

Alfredo Navarro was born on the Eastern coast of Spain in the city of Alcoy (Alicante) in 1965. Initially inspired by his Father, Navarro attended the Art School of Escuela Municipal de Bellas Artes at a young age. He continued his education in Valencia where he received a degree in Economics at the Valencia University as well as an Art degree from Circulo de Bellas Artes. Navarro then returned to Alcoy to paint and apprentice under the painter/teacher Selles.

Alfredo Navarro’s undeniable talent for painting was encouraged by his Father who was also a painter. Navarro’s Father taught both Navarro and his brother the techniques of oil painting. At age 19, Navarro began painting professionally and in 1986 received first place in an art exhibition sponsored by the Government Delegate of Galicia in Galicia, Spain.

Alfredo considers his technique somewhere between Realism and Hyperrealism. His studies provided an admiration for the artists Velazquez, Picasso and Greco. Alfredo respects Velazquez for the artist’s ability to capture the soul of a person in a portrait and the colours and atmosphere used to create the paintings. Picasso and Greco are admired for their bold creativity and expressive colours. Such creativity, expressive colours and atmosphere can be found in Alfredo’s striking sunsets, sweeping seas and foaming waves.

Inspired by the vastness of both the Mediterranean Sea and the Atlantic Ocean, Alfredo paints seascapes of undulation as well as seascapes of tranquillity. With great artistic emotion and power, he captures waves crashing against rock formations. He paints translucent waves gently rolling into shore as the evening’s sunset pierces through the water. His calm seas mesmerize viewers with the ocean’s expanse, or the feeling of a warm sun dancing on the water, or an endless horizon. 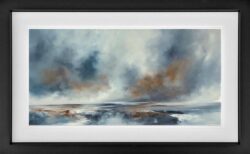 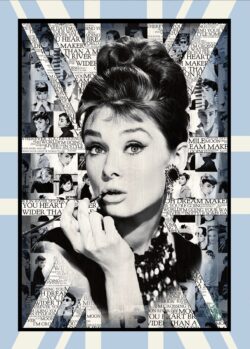 Made In Britain Hepburn, Art on Wood 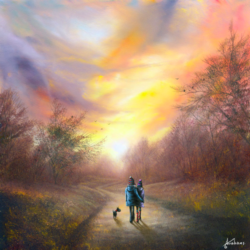 It’s The Moments Together That Change Us Forever, Limited Edition Giclée on Canvas

Warmth Of Your Soul, Limited Edition Giclée on Canvas