Mill Town is an original painting in mixed media by Manchester artist David Bez – who presents a body of original works, fizzing with the urban grit of the industrial city.

We are proud to unveil a new evocative body of works from David Bez, a painter fast establishing himself as an exciting new voice in the world of Northern Art. 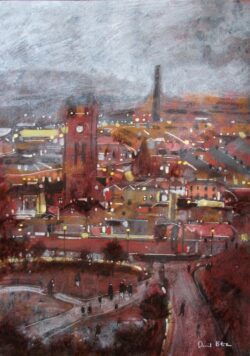